August 26, 2021 is Women’s Equality Day, which commemorates the publication of the 19th Amendment in 1920 that gave women the right to vote. This year, Women’s Equality Day is dedicated to full legal equality for women – publication of the ERA in the Constitution. EME is co-sponsoring the national #Rally4ERA at the Supreme Court at noon and at other locations nationally. Natalie White, EME Vice President said, “Since the beginning of Equal Means Equal, we have staged numerous direct actions, from getting arrested for tagging the U.S. Capitol, die-ins in Virginia, protesting outside the Department of Justice in D.C., and many more. We are very excited the major women’s organizations are doing this direct action outside of the Supreme Court. We strongly believe direct action is the best course at this time to put pressure on the Biden administration to finally enshrine the ERA in our Constitution.” In June, Vice President Harris told the United Nations’ Generation Equality Forum, “addressing gender equity and equality is essential to addressing every other challenge we face, which is certainly true in light of the current threats to democracy.” As the first female Vice President, Kamala Harris should be encouraging the Biden Administration to publish the ERA.

EME’s President Kamala Lopez said, “On behalf of the 45 million women who voted for President Biden and Vice President Harris, we demand that they keep their campaign pledge to enshrine the ERA in the U.S. Constitution and publish the ERA as the 28th Amendment now.” Biden pledged in his “Agenda for Women” “to enshrine gender equality in our Constitution,” which means to publish the ERA, which he acknowledged had been properly ratified by 38 states.  But, under the radar, he has refused to do so, and worse, he has done nothing to stop his DOJ from literally fighting against the ERA in two federal lawsuits, and they are asserting exactly the same legal positions that Trump and Bill Barr asserted in the same two federal cases.

The first case was brought by women on behalf of women, Equal Means Equal, et al. v. Ferriero, and the second was filed by the last three states to ratify the ERA:  Virginia, Illinois, and Nevada. Both cases are now in the Courts of Appeals, for the First Circuit and the D.C. Circuit, respectively.

All Plaintiffs in both lawsuits agree that the seven-year deadline is unconstitutional. Article V of the Constitution gives Congress and the states equal power to determine when our Constitution should be amended, yet Congress deprived the states of their equal powers by placing a ratification deadline in the ERA’s Preamble rather than in its text. Since states can only ratify the text of a proposed amendment, the states had no opportunity to decide for themselves whether they wanted their ratification rights restricted by a time limit. This violates the Constitution.

“Congress cannot restrict states’ equal amendatory rights under Article V. By putting the deadline in the preamble, Congress restricted states’ rights, thus violated Article V, because the states can only vote on language in a proposed Amendment’s text, not its Preamble. This made the deadline void from the beginning,” EME’s legal counsel, Wendy Murphy, explained. “Further, the OLC had no power to tell the Archivist not to publish the ERA, but Biden, as head of the executive branch, does have the power to demand that the Archivist immediately publish the ERA as the 28th Amendment,” Murphy concluded. Attorney for 86 of the EME Amici Curiae, Friends of the Court, Arlaine Rockey, said, “ERA advocates have been tricked like cats chasing a laser beam – all to take the spotlight off Biden. They were told to press Congress to remove the already void deadline – with a resolution not written in a way to even validate the already ratified ERA.” EME Sentinels from around the country, in honor of the suffragists, protested in the June heat at the DOJ, holding signs asking Attorney General Merrick Garland “How Long Must Women Wait for Equality?” The DOJ knew they were outside, but nothing moved inside on the ERA. Yet, the buck stops with Biden. There is no excuse for Biden not to direct the Archivist to publish the ERA now. Women have legally been second class citizens since the birth of this nation, 245 years ago. We demand that our equal status be enshrined in the Constitution now.

The Women’s Equality Day rallies can either be protests against Biden and the DOJ — or if the Democrats want to embrace the 45 million women who voted for Biden, the President should keep his campaign promise and publish the ERA. 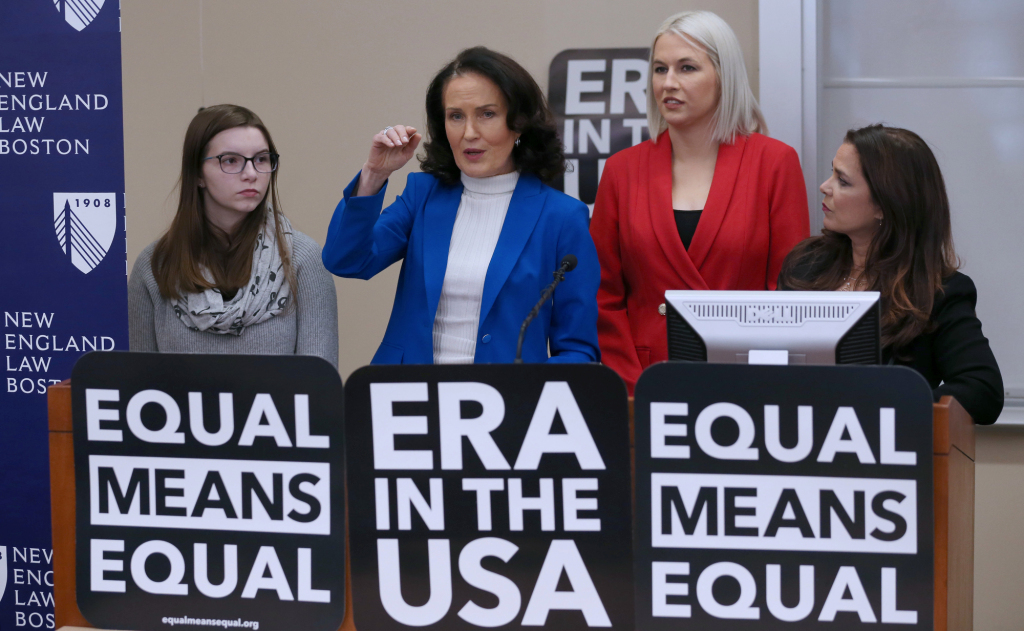